What’s the Difference Between Craft Beers & Micro-Brews? May 8, 2019 The craft beer scene is rapidly expanding as more people develop an appreciation for finely-brewed beers. When you talk with an enthusiast or staff member at a beer store, you may hear them use terms such as “craft beers” and “micro-brews.” To help you navigate beer conversations and understand what you’re purchasing when you try one of these options, here’s a breakdown of what these industry terms mean.

Guide to Craft Beer vs. Micro-Brew 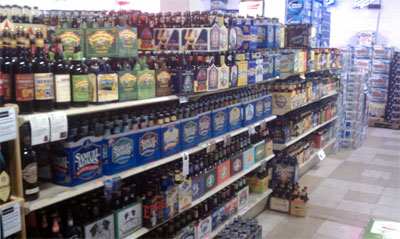 A microbrewery follows strict guidelines for how much beer they produce. A microbrewery is defined as any brewery that produces no more than 15,000 barrels of beer a year and sells at least 25% of their products onsite. Because of this strict “size” regulation, micro-brews are much rarer than craft beer.

This term was created in the past 20 years, as beer rose in popularity and many micro-breweries started producing more beer to accommodate demand. A craft brewery is often described as any brewery that isn’t one of the major beer corporations. These companies are independently owned and don’t produce more than 6 million gallons a year.

They also use traditional ingredients for brewing, such as malt, water, yeast, and hops. If they do use an adjunct substance like rice, corn, or honey, it’s for enhancing flavor rather than cutting costs, which mega-breweries are often guilty of.

If you’re ready to try a unique, boutique beer and to support small business, visit the Universal Discount Package Store in Norwich, CT. This 8,000 square foot liquor store has 100 square feet of micro-brews, many of which are refrigerated and ready to drink. Their expansive beer selection offers something for every taste, including beer kegs, wine & spirits, and six-packs. Browse their offerings on their website and call (860) 889-6555 to speak to a team member about their inventory. Bourbon is a subset of traditional American whiskey, but with the same deep amber hue, you may not visibly notice the difference. In addition to being made primarily from corn—as opp...read more
What Are the Differences Between Sweet & Dry Wines? If you like going to the wine store, you should know that the bottles are often labeled as sweet or dry. While you might have a preference for one over the other, you might also...read more
3 Tips for Perfectly Pouring a Beer Having a beer after a long day of work can help you unwind and relieve some stress. If you want a better drinking experience, you should learn the art of pouring beer ...read more
How to Understand the Wine Chart Going to the wine store and looking for something new can be very intimidating. Labeling their products as dry, sweet, or medium is the main way wine manufacturers differentiate betw...read more
How to Infuse Whiskey Into Your Cooking If whiskey is your favorite liquor, you wonder how to infuse it into your cooking. Simple tools, fruit and spices, and patience produce palate-pleasing results with whiskey...read more
Like us on Facebook
Follow us on Twitter
Review us on Yelp
Review us on Google