In July 2015, Cincinnati, OH, had the privilege of hosting the 86th Major League Baseball All-Star Game at Great American Ballpark. To prepare for this exciting event, the Reds put $5 million into improvements, including two new bars, a new digital scoreboard, and upgraded concessions stands. To ensure enough structural support for these improvements, the Reds called in The Dwyer Company, which specializes in a deep foundation system called “micropiles.” 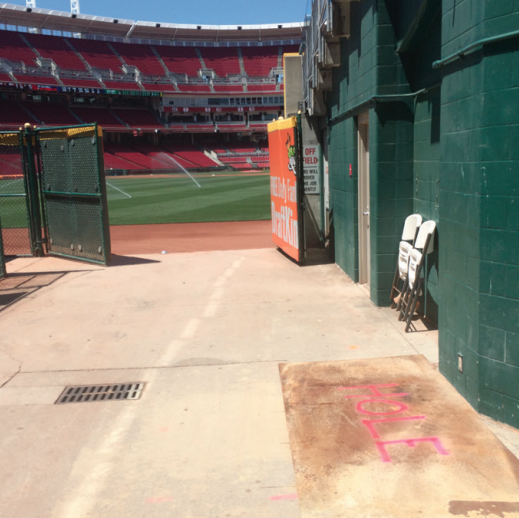 These micropiles were designed and installed to support the new party deck—situated just above the Reds bullpen—as well as the digital scoreboard at right-center field. The Dwyer Company began drilling holes of about 60 feet, with about 14 feet embedded in shale or limestone rock. The steel bars inserted into these holes ranged from 1.5 to 3 inches in diameter.

Once the micropiles were drilled and the steel bars inserted, a 4,500-psi cement grout was used to fill the holes and secure the structure. At the conclusion of the project in June 2015, the micropiles supported loads ranging from 50 to 100 kips per pile. This ensured adequate support for the new party deck and digital scoreboard, guaranteeing the safety of fans and players alike.

Micropiles offer numerous benefits for foundation underpinning and repair. Because they are so small in diameter, they’re perfect for tight spaces that lack room for more traditional foundation repair equipment. They’re also ideal in areas with rocky soil, including the shale and limestone beneath the Great American Ballpark, as they draw stability and load-bearing capabilities from the rock itself. They also boast a faster installation period than other methods—which is perfect when the upcoming All-Star Game is your deadline!

The Dwyer Company completed the micropiles at the Great American Ballpark in June, well ahead of the 2015 All-Star Game, and have gone on to perform many other projects for both commercial and residential customers. With more than 45 years of experience, you can count on them for all your foundation repair or installation needs, including underpinning, basement waterproofing, and slabjacking.

With locations in West Chester, OH, and Lexington and Louisville, KY, they’re equipped to handle the foundation repair needs of businesses and homeowners throughout the Greater Cincinnati area. Visit their website to learn more about micropiles, or call one of their three locations to request a free estimate. You can reach them at (513) 777-0998 in West Chester, (859) 231-0998 in Lexington, and (502) 489-5438 in Louisville.

Share
Story
Other Announcements, Events and Deals from The Dwyer Company
3 Styles of Foundations While it’s easy to see the differences between styles of houses, different foundation types are rarely noticed unless you are involved in their construction, or you need foundation r...read more
3 Common Causes of Bowed Walls

A bowed wall is a wall that has started to curve, buckle, or exhibit signs of inward movement. This situation indicates that the wall is weakening and that there could be structural ...read more
What's the Difference Between Concrete and Shotcrete?

Hard surfaces can completely transform your yard, creating entertaining space or the perfect spot for an outdoor pool or spa. However, understand the differences between shotcre...read more
5 Signs Your House Needs Foundation Repair

As a homeowner, you may need to get foundation repair if your house is on shifting ground or the structure is old. Although the foundation is made from strong material—typically...read more
4 Shotcrete Applications

Shotcrete is an incredibly versatile construction material, with physical properties that many find superior to those of traditional concrete or mortar. Thanks to its structural stab...read more
Like us on Facebook
Follow us on Twitter
Review us on Yelp
Review us on Google