4 Inspiring Olympic Gymnasts Your Child Can Look Up To February 27, 2018

Olympians are world-class athletes who represent the best in their field. Many of them are fantastic role models for young kids, especially those who are just starting out in gymnastics. Elite Gymnastics, serving the Passaic and Bergen Counties and the surrounding New Jersey areas, provides classes for kids who are interested in the sport. To get your young one excited and motivated, the team highlights four Olympic gymnasts your little athletes can look up to.

Gabby Douglas first represented the U.S. in the 2012 London Summer Olympics, taking home the gold for the team and individual all-around competitions. She was the first woman of color of any nationality and first African-American gymnast to become the Individual All-Around Champion. Gabby is also the first American to win gold in the gymnastics individual all-around and team competitions at the same Olympics. She was a member of the “Fierce Five” team in 2012 and “Final Five” in 2016.

Because of her remarkable, historical successes, her life story was adapted into a biopic in 2014 titled “The Gabby Douglas Story.” She also stars in her own reality TV series, “Douglas Family Gold.”

Simone Biles is an American gymnast awarded the 2016 Olympic individual all-around, vault, and floor gold medals, as well as the balance beam bronze medal. Along with Douglas, she was a member of the “Final Five” in the Summer Olympics at Rio de Janeiro.

But her path to Olympic stardom hadn’t been easy. She never knew her father, who had abandoned the family. Her biological mother was addicted to alcohol and drugs and, as a result, Simone and her sister were taken into foster care when Simone was five years old. The sisters were adopted by their grandparents, who encouraged and supported Simone’s athletic talents. 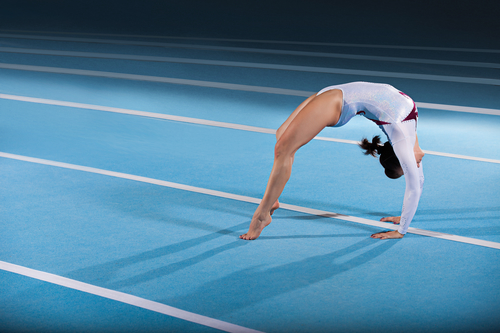 Houry Gebeshian is an American-Armenian with dual citizenship in both countries. She grew up in the U.S., graduating from the University of Iowa in 2011 with a bachelor’s degree, and earning her master’s at the Wake Forest School of Medicine. She competed for the Armenian team in the 2016 Olympics.

When she isn’t performing incredible athletic feats on the floor, she’s a physicians’ assistant and helps deliver babies. In 2016, she told the BBC she works a 16-hour and 24-hour shift each week and spends her free time at the gym.

Oksana Chusovitina has competed in the Olympic Games for nearly a quarter of a century. In 2016, she made history as the oldest gymnast to compete in the Olympics. She was 41 at the time. Before competing in Rio de Janeiro, she’d also competed internationally for the Soviet Union and Germany before returning to represent her home country of Uzbekistan. She ranked fifth in vault.

Gymnastics is an excellent way to teach children the importance of hard work and perseverance—as exemplified by these inspiring stars of the sport. If your little one is interested in starting classes, call Elite Gymnastics at (973) 423-4040 today. Kids can start as early as three years old, strengthening their motor skills and coordination. Backed by over 40 years of experience, their staff knows how to keep their athletes challenged and motivated. To view a schedule of available gymnastics classes, visit their website. Whether you’re signing up your child for beginner’s gymnastics classes for the first time or they have been in lessons before, there are a few items they should always...read more
5 FAQ for Parents Considering Ninja Classes for Their Kids

It’s often hard to get kids to break away from the TV, touchscreen tablets, and video games after a long day at school. Luckily, the team at Elite Gymnastics, serving Passaic an...read more
Why You Should Sign Your Child Up for Night Swim Lessons Finding engaging activities for energetic and adventurous children is often a challenge for parents. Rock climbing classes offer the perfect opportunity to help kids remain active an...read more
Like us on Facebook
Follow us on Twitter
Review us on Yelp
Review us on Google