by Michael Vandenburg
(reprinted with permission from the Piscataway Community News Direct,
January 11, 2018) 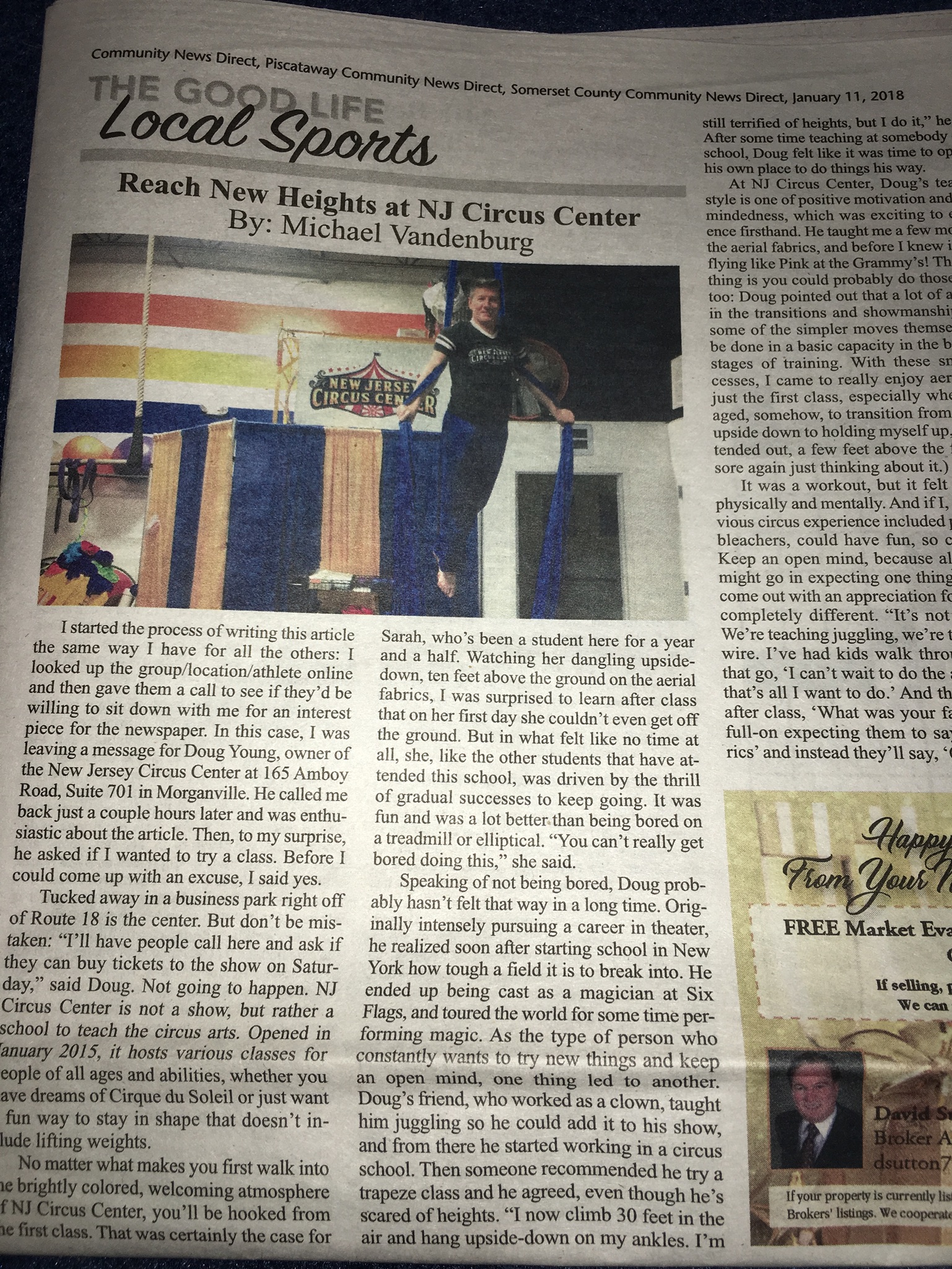 I started the process of writing this article the same way I have for all the others: I looked up the group / location / athlete online and then gave them a call to see if they’d be willing to sit down with me for an interest piece for the newspaper.  In this case, I was leaving a message for Doug Young, owner of the New Jersey Circus Center at 165 Amboy Road, Suite 701 in Morganville. He called me back just a couple hours later and was enthusiastic about the article.  Then, to my surprise, he asked if I wanted to try a class.  Before I could come up with an excuse, I said yes.

Tucked away in a business park right off of Route 18 is the center. But don’t be mistake: “I’ll have people call here and ask if they can buy tickets to the show on Saturday,” said Doug.  Not going to happen. NJ Circus Center is not a show, but rather a school to teach the circus arts. Opened in January 2015, it host various classes for people of all ages and abilities, whether you have dreams of Cirque du Soleil or just want a fun way to stay in shape that doesn’t include lifting weights.

“ You can’t really get
bored doing this ,” 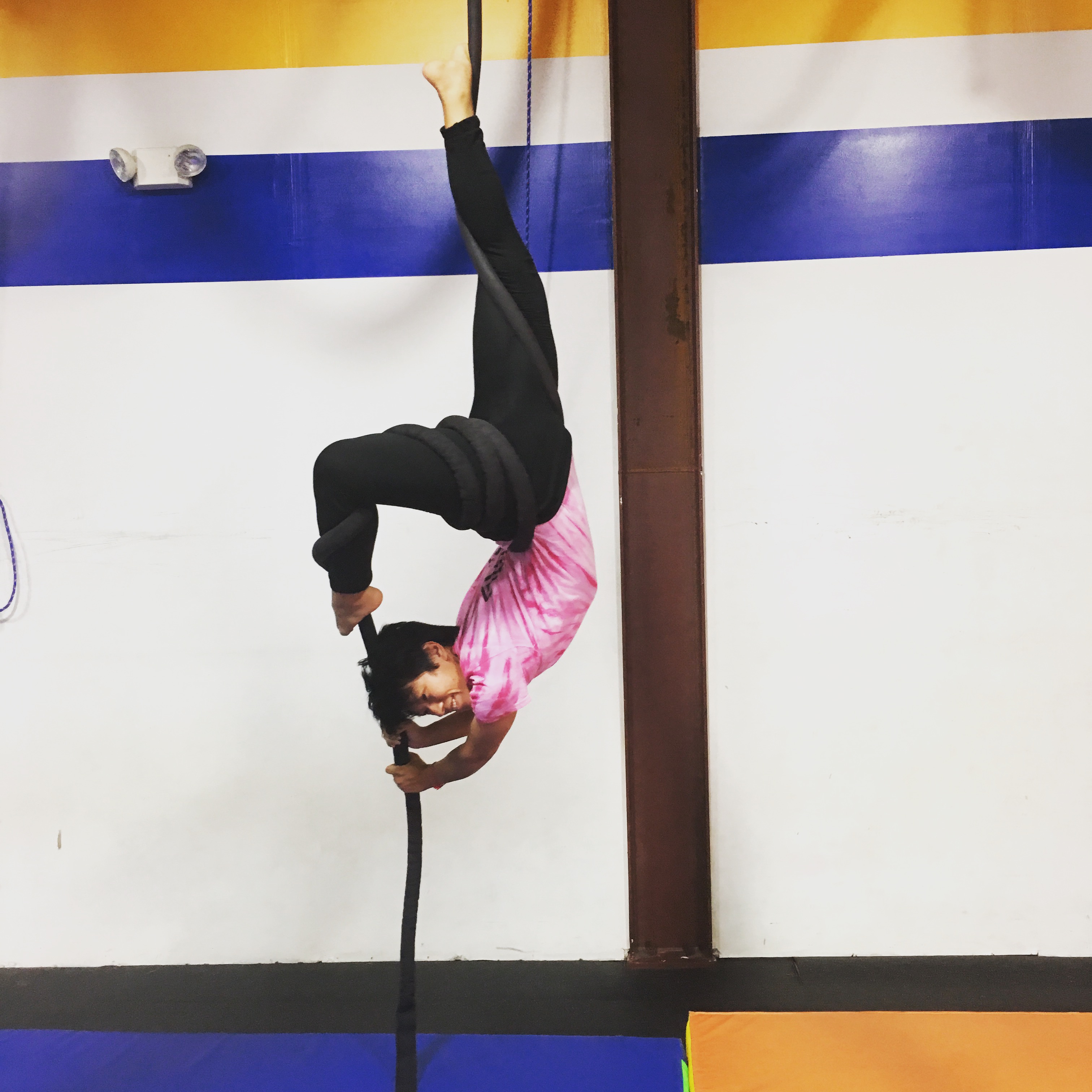 No matter what makes you first walk into the brightly colored, welcoming atmosphere of NJ Circus Center, you’ll be hooked from the first class. That was certainly the case for Sarah who’s been a student here for a year and a half.  Watching her dangling upside-down, ten feet above the ground on the aerial fabrics, I was surprised to learn after class that on her first day she couldn’t event get off the ground. But in what felt like no time at all, she, like other students that have attended this school, was driven by the thrill of gradual successes to keep going.  It was fun and lot better that being bored on a treadmill or elliptical. “You can’t really get bored doing this,” she said.

Speaking of not being bored, Doug probably hasn’t felt that way in a long time. Originally intensely pursuing a career in the theater, he realized soon after starting school in New York how tough a field it is to break into.  He ended up being cast as a magician at Six Flags, and toured the world for some time performing magic.   As the type of person who constantly wants to try new things and keep an open mind, one thing led to another.  Doug’s friend, who worked as a clown, taught him juggling so he could add it to his show, and from there he started working in a circus school.  Then someone recommended he try a trapeze class and he agreed, even thought he’s scare of heights. “I now climb 30 feet in the air and hang upside-down on my ankles. I’m still terrified of heights, but I do it,” he said. After some time teaching at somebody else’s school, Doug felt like it was time to open up his own place to do things his way.

At NJ Circus Center, Doug’s teaching style is one of positive motivation and open-mindedness, which was exciting to experience firsthand. He taught me a few moves on the aerial fabrics, and before I knew it, I was flying like Pink at the Grammy’s! The funny thing is you could probably do those moves too; Doug pointed out that a lot of aerials is in the transitions and showmanship, while some of the simpler moves themselves can be done in a basic capacity in the beginning stages of training.  With these small successes, I came to really enjoy aerials from just the first class, especially when I managed, somehow, to transition from swinging upside down to holding myself up, limbs extended out, a few feet above the floor. (I’m sore again just thinking about it.) 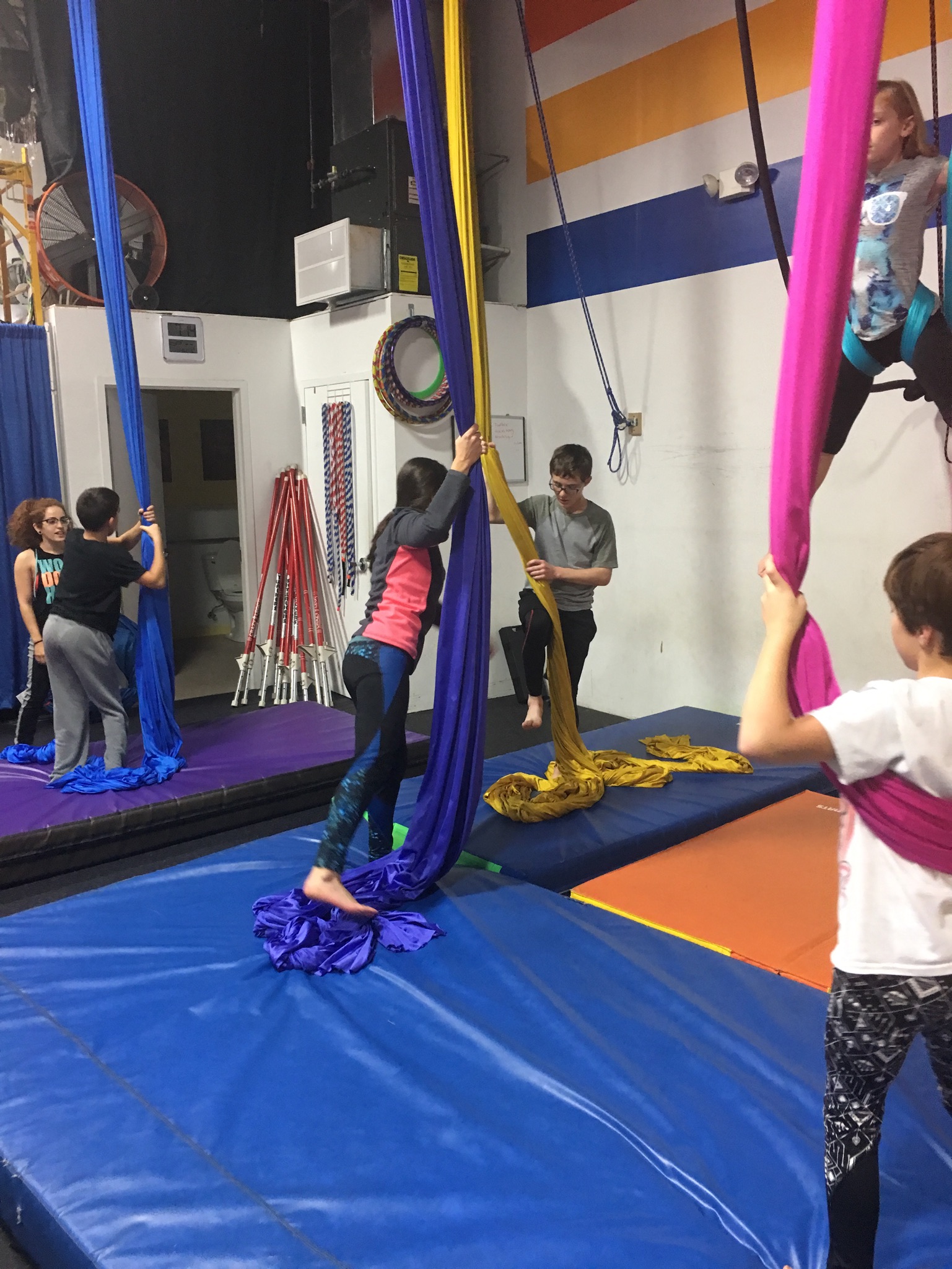 It was a workout, but it felt great both physically and mentally.  And if I, whose previous circus experience included peanuts and bleachers, could have fun, so can anyone.  Keep an open mind, because although you might go in expecting one thing, you might come out with an appreciation for something completely different.  “It’s not just aerials. We’re teaching juggling, we’re teaching tight wire.  I’ve had kids walk through the door that go, ‘I can’t wait to do the aerial fabrics, that’s all I want to do.’ And then I ask them after class, ‘What was your favorite thing?” full-on expecting them to say ‘Aerial Fabrics’ and instead they’ll say, ‘Chinese yo-yo, that was awesome.’”

No matter your age or even if you have a medical condition, the staff will help you find a modification that works for you. “You have to learn how to get your body to do the things you want to do. Everything is adaptable in one way or another.” So call them at 732-705-3244 to give it a try. I didn’t regret it and neither will you.