At this point, change tends to be something kept in the car, or perhaps dropped in a jar with the intention of cashing it all in or saving it for a later date. It might be worth looking at your collection more closely, however, because it could be home to a few rare coins. If you're new to the coin collector's market or looking to sell your coin collection, here are a few that could already be in your possession.

3 Rare Coins That Might Be Stashed in Your Collection

The rarity of these coins will vary depending on the year and quality, but one distinct punching error remains the defining factor. The heads side will show visible signs of doubling, which essentially makes the letter printing look like it was punched in twice. On the more valuable side of these rare coins is the 1969-S Lincoln cent, which has clear doubling on the entirety of the heads side with one exception: the mint mark. That one can fetch prices as high as $35,000. The 1995 double-die penny, valued anywhere between $20 and $50, is more likely to be in your average collection. 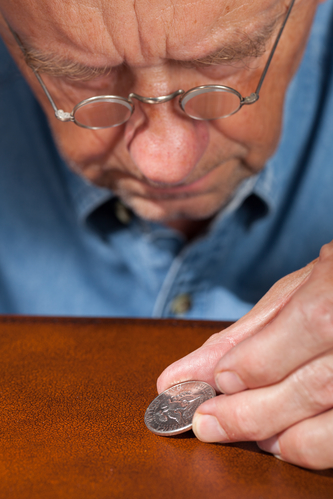 Thanks to a subtle defect, it looks as if there is an extra leaf on the ear of corn displayed on certain 2004 Wisconsin state quarters. The cause and overall value have been debated, but this coin can be found in two types: one with a high leaf and one with a low leaf. If yours matches these specifications, you could have a $200 to $300 quarter on your hands.

With Ben Franklin on the obverse and the Liberty Bell on the reverse along with a small eagle, this half-dollar coin first went into circulation in 1948. Since it was eventually replaced with the image of the then-recently-assassinated President John F. Kennedy in 1964, you could get between $12 and $125 from your local coin dealer.

There's nothing quite like discovering that something valuable has been right under your nose this entire time. If you get especially lucky, you could turn a handful of loose change into some serious cash.

If you're looking for the perfect spot to sell your rare coins and other valuables, American Coins & Gold is the best source in the Tri-State area. With locations in Bridgewater and Wayne, NJ—as well as Long Island, NY's East Garden City—you'll have no problem finding an expert to evaluate your collection. Check out their website for more on coin sales, and call (908) 575-9400 for their Bridgewater location, (201) 628-4800 for their Wayne location, and (516) 742-0900 for their East Garden City location.

Share
Story
Other Announcements, Events and Deals from American Coins & Gold
What Determines Value in the Silver & Gold Buying Process? From analyzing inflation rates to evaluating supply and demand, there are many things to consider when putting a price tag on precious metals. American Coins & Gold, serving cust...read more
Top 5 Gold Buying Tips If you want to get started in the gold buying market, you’re not alone. In fact, many people across the country are beginning to see the value of this investment—and how it has the p...read more
How to Tell If You've Found Rare Coins Whether you’re an avid collector or not, rare coins are an exciting discovery. Not only are they an interesting find, but they’re a profitable way to make the most of your pocke...read more
How Do Rare Coin Appraisals Work? Here at American Coins & Gold we love when we are able to tell someone their rare coin is worth some serious cash.  It all begins with a no obligation appraisal process whic...read more
Like us on Facebook
Follow us on Twitter
Review us on Yelp