SWING INTO FALL With a Special First Program of The 2014 Season of Brooklyn's Most Exciting Children's Chorus! September 26, 2014

For the first rehearsal of the Fall/Winter 2014 session at the historic Lafayette Avenue Presbyterian Church in Fort Greene, Brooklyn, NY 11217.

No auditions ---- Everyone is welcome --- (Register on Thursday, October 9th).

Fee $20. per class (more details, please read on and please PASS IT ON, thanks so much).

(Brooklyn, NY) --- Swing into fall when the ONE WORLD BROOKLYN KIDS CHORUS kicks off the 2014 fall/winter rehearsal session on Thursday, October 9th from 3:30 - 5:30 pm at the historic Lafayette Avenue Presbyterian Church (85 South Oxford Street between Fulton & Lafayette), when beloved teaching artist, Carolynn Murphy, partners with dance master, ARTURO PEREZ, in a breathtaking swing dance demonstration guaranteed to get the kids toes tappin' and fingers snappin'. Arguably, one of America's most enduring and popular contributions to the jazz genre, swing music is historically linked to the joyful expression of dance.

A much sought-after private dance instructor, Arturo Perez, has most recently taught open group lessons for the Harlem Swing Dance Society (youth & adults). He is currently getting seniors on their toes and maintains an open beginner weekly dance lesson at Swing 46. Says, Arturo, who was born in Ponce, Puerto Rico, "I began dancing at a very early age to Latin rhythms, and when my family moved to New Orleans, I was exposed to the music & dance of zydeco, Cajun, blues, brass hop and swing genres." With all of these eclectic influences, Arturo's authentic swing dancing has an extra zing in his swing. He has performed with the Jitterbug Kids, Fusha Dance Company, The Harlem Swingers, George Gee's Jump, Jivin' Wailers and many other companies and at events. In 2011, Arturo and his partner, Lana Turner, kicked off the Lincoln Center's Midsummer Night's Swing with a special spotlight performance at Macy's.

Carolynn Murphy, a favorite OWBKC resident music teacher, as well as an accomplished swing & rhythm tap dancer, will partner with Arturo in a dazzling display of swing dance & music followed by some rare archival film footage of dancing from the 1940's. Commented, Ms. Murphy who also holds a degree in environmental science from Cornell University, "It's been a long summer, and I am thrilled to see the kids again with this surprise in store."

Leading the ONE WORLD BROOKLYN KIDS CHORUS for the 2014 fall/winter season will be the acclaimed, singer-songwriter and recording artist --- JEAN ROHE. Ms. Rohe's lyrical style evokes the heart & spirit of American folk traditions as well as world music influences. Her lovely voice and focused energy has inspired many audiences both young & old. She embraces the core values of the OWBKC whose mission statement is to teach music by shining light on timeless values of love & peace; celebration of diversity & beauty; friendship & fellowship as well as social justice and environmental sustainability & justice. So far, the OWBKC has taken on the topics of honeybees & colony collapse disorder, water pollution, land use & loss of habitat as well as climate change.

Since the ONE WORLD BROOKLYN KIDS CHORUS was founded in 2012 during Hurricane Sandy, the group has given six concert performances featuring music from around the globe in a variety of genres --- including folk, blues, gospel, jazz & pop. The kids have been joined by top flight professionals including the incomparable New Orleans jazz & blues pianist, HENRY BUTLER, whose impeccable artistry and distinguished career have delighted countless audiences.

In December 2013, the OWBKC honored the passing of Nelson Mandela as they joyfully performed the song, "Thula Klizeo" by the internationally acclaimed South African vocal group LADY SMITH BLACK MAMBAZO during their "Christmas Time is Here" program. Fueled by praises from Ladysmith Black Mambazo, when the kids had a chance to meet members of the group in a pre-concert, meet & greet reception at "Celebrate Brooklyn" in Prospect Park, this energy ignited the 2013 winter session when the OWBKC more than doubled in size.

With the success of the May 19th, 2014 fundraiser concert still burning, the kids have much to look forward to as they welcome back celebrated fiddler, song writer, performer & recording artist, LISA GUTKIN. In addition to being a grammy-winning member of the famed KLEZMATICS, Ms. Gutkin is composer-in-residence for the OWBKC. Says, Ms. Gutkin, "I loved the dedication that these kids had at the rehearsals and how much they embraced the songs. But then the concert came and they rose even higher. The were seriously professional. I can't wait to see them again."

Another special guest artist is the enchanting & expressive singer, multi-instrumentalist & recording artist, LORIN SKLAMBERG, from the KLEZMATICS. Mr. Sklamberg taught & performed a song he wrote from the grammy-winning album, "WONDER WHEEL" which sets previously unpublished lyrics by WOODY GUTHRIE and highlights the most iconic & culturally diverse of all Brooklyn neighborhoods --- Coney Island.

To add to the lineup of amazing teaching talent is the internationally renowned classical guitarist, ROBERT SECRIST, who continues as the OWBKC "house guitarist." An award-winner of the 4th International Alirio Diaz Guitar Competition, Mr. Secrist is currently working on an all-Bach recording. His exceptional virtuosity on the classical guitar commenced each performance of the OWBKC setting a tone of first rate musicianship for the audience & kids.

Joining musical forces, the kids also performed with the LAPC adult choir, "The Inspirational Ensemble" under the direction of beloved gospel & jazz singer, JANIS RUSSELL, during the December 8th, 2013 Christmas service. The kids also had the opportunity to perform the Carole King classic, "You've Got a Friend" with members of the Lafayette Avenue Presbyterian Church including the very talented, CARA BROWNELL, DEB HOWARD as well as accomplished professional jazz vocalists, CARLA COOK, and JANIS RUSSELL.

Brooklyn's very own, SHELLEY THOMAS, a multi-talented vocalist with the expertise to sing in a wide variety of styles and languages, including Bulgarian, Arabic, Turkish, Greek, Serbian, Macedonian, Croatian, Ukrainian, Spanish, Hindi and Bengali will return to delight the kids with her youthful energy.

On the classical side, YONAH DANIELLA GERSHATOR, lyric mezzo-soprano, will lead the kids in fun vocal exercises and movements as well as teach a beloved song, "Carroll of the Bells" this fall. Ms. Gershator has performed with the New York Philharmonic, Vienna Philharmonic, Royal Concertgebouw, San Francisco Symphony, American Symphony Orchestra, Mostly Mozart, Little Orchestra Society and Yale Choral Artists to name a few. She sings regularly at the Brick Presbyterian Church and Park Avenue Synagogue as both chorister and ensemble soloist. Originally a flutist and pianist, Ms. Gershator, attended Tanglewood, Julliard & Manhattan School of Music. She is also certified in the Feldenkrais Method of Somatic Education and specializes in working with musicians.

Says, SELMA JACKSON, long time Brooklyn business owner & champion of women owned business, Brooklyn resident, social activist and Clerk of Session of the Lafayette Avenue Presbyterian Church, "What a joyful contribution the ONE WORLD BROOKLYN KIDS CHORUS has made to the LAPC and the Brooklyn community. It's heart warming to watch the progress and hear their little voices make a big sound." 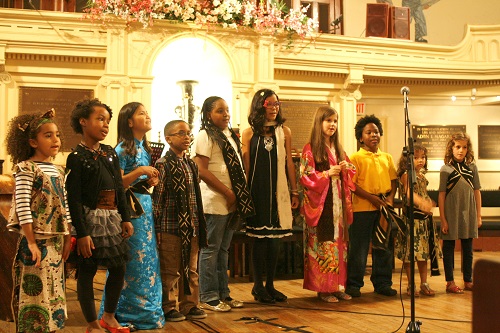 You are invited to join the ONEWORLD BROOKLYN KIDS CHORUS on Thursday, October 9th from 3:30 - 5:30 p.m.For the first rehearsal of the Fall/Winter 2014 session at the historic L...read more
Add to Calendar
Like us on Facebook
Review us on Yelp