Mobile food trucks were at one point few and far between, but nowadays, most people don’t have to go far to find one. The popularization of these restaurants on wheels is a win-win for both chefs and their patrons: while the culinary-gifted are able to reach a wider audience by taking their treats to the streets, consumers benefit from the convenience of being able to grab an inventive and delicious meal on the go. Shanghai Mobile Kitchen Solutions of Brooklyn, NY, facilitates the growth of this trend by providing custom kitchens and food trucks for entrepreneurs in the Tri-state area.

If you’re going to get started in any business, it’s always helpful to have a little background information about your industry. Here are some interesting tidbits about the origin of today’s mobile food trucks: 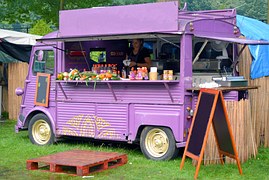 Mobile food trucks are now making their way to rural and suburban areas in addition to city environments, so there’s never been a better time to get started in the industry. To learn more about how you can start a food truck, call Shanghai Mobile Kitchen Solutions at (800) 253-4815, or visit their website.