Looking to experience all that the Big Apple has to offer? When you book a sightseeing tour with OPEN LOOP New York, you can take advantage of the company's hop-on, hop-off bus tours, allowing you to conveniently see the sights you're most interested in. And to sweeten the tour package, OPEN LOOP is happy to offer a FREE ticket to the Museum of the City of New York.

Where else can you snag such a deal? Free admission to the museum is included on all 1 Day, 2 Day, and 3 Day tours for the Uptown, Downtown, Brooklyn, and Night Tour sightseeing packages. The Museum of the City of New York celebrates the diversity and rich heritage of the city. Current exhibits include Picturing Prestige—portraits of early New Yorkers from 1700-1860—Gilded New York, featuring costumes and accessories at the end of the 19th century, and Timescapes, three screens depicting the city's history. 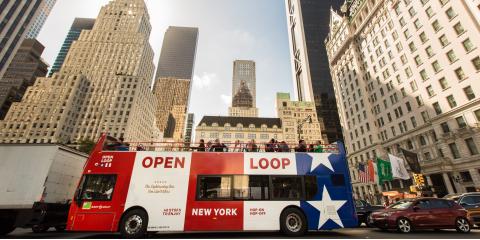 OPEN LOOP has recently come under new management, doubling their fleet of tour buses and upgrading their audio tour narration (available in nine different languages). The unique hop-on hop-off tour packages give riders the chance to explore the city at their own leisure. Stop off at the Empire State Building; do some shopping in SoHo; or catch a show at Radio City Music Hall. And after you've taken in all the sites, don't forget to use your museum ticket and enjoy a little hometown culture.

If you would like to book your adventure and receive your FREE museum ticket, call OPEN LOOP New York at (212) 371-6736. To purchase your tickets, please visit website. Begin your sightseeing tour with the best tour bus in the city! From Times Square and the Empire State Building to the bustling neighborhoods of Brooklyn, New York City has so much for a tourist to see. OPEN LOOP New York will help you exper...read more
Buy a NYC Sightseeing Bus Tour Ticket, Get a Free Central Park Bike Rental If you’re looking to get a beautifully intimate glimpse of New York City, OPEN LOOP New York has just the ticket for you. This sightseeing company offers a number of bus to...read more
Explore Downtown Manhattan With OPEN LOOP New York Bus Tours! New York certainly is a magnificent place; from the city’s glittering bridges to its iconic buildings, the opportunity to discover is never out of reach. With OPEN LOOP New York...read more
Winter Sightseeing in NYC? Hop on an OPEN LOOP New York's Bus Tour You finally did it! You planned an epic, once-in-a-lifetime vacation to New York City…in the middle of winter. Lots of savvy travelers choose to visit the Big Apple in the off-season...read more
Like us on Facebook
Follow us on Twitter
Review us on Yelp